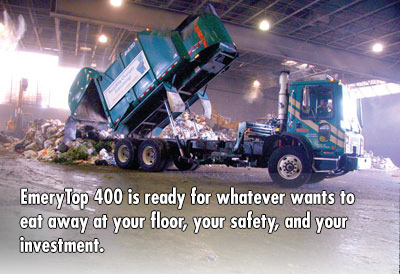 Chemical Attack: Maybe you know exactly what's constantly seeping, dripping, and oozing on and through the surface of your floor. Or maybe you don't.

There's no question that some floors are under constant attack from chemicals—the kinds that easily eat away at ordinary toppings like a malignant cancer. And once they've invaded the body of your floor, the damage progresses until there's little hope for recovery.

Stop chemical attack dead in its tracks. It might not be too late. EmeryTop 400 is ready for whatever is eating away at your floor, your safety, and your investment.

In most high strength toppings, the cement paste is usually the first component to submit to chemical attack and begin to fail. After a relatively short period of time, the cement paste of either a concrete floor or of a cement based topping will begin to weaken and erode, losing its grip on the high strength aggregates and creating a weakened condition called micropitting.

While initially difficult to detect, given the dirty environment that exists in most industrial and solid waste facility floors, micropitting becomes readily apparent as large areas of the floor surface deteriorate off the concrete substrate.

EmeryTop 400 floors are uniquely protected against chemical attack through chemical strengthening and densifying of the cement paste. No other product can boast of the dramatic benefits that this feature provides the owner of an EmeryTop 400 floor. This internal sealing and strengthening of the topping greatly slows the rate of chemical penetration, resulting in a dramatic increase of the floor's life cycle. Independent tests show that EmeryTop 400 has been tested for resistance to contaminant penetration in accordance with ASTM C 1202, and shows a significantly lower corrosion rate (when measured in coulombs) when compared to high strength iron toppings.